ACI Marina Šimuni is situated in the west of Pag Island, in the Maun Channel. It can perhaps be considered to be the north entrance to Dalmatia, as it is the last marina in the Kvarner archipelago. Pag’s seemingly inhospitable landscape offers a different picture to what is usually seen elsewhere in the Adriatic islands – the colours are different here, the rocks’ structure is more peculiar, and the sun shines almost all the year round. A keen-eyed visitor will discover a veritable treasure-trove of history, culture, and food, as well as all the little things which the hard-working islanders toiled to create in order to survive in a unique environment – and to make it comfortable to live in.

Pag’s vegetation is very sparse, and at first glance its rocky landscape resembles the lunar surface. Sheep graze here, chewing on the scarce leaves of grass plucked from the stony soil and covered with salt from the Velebit Channel, deposited by strong bura winds that blow incessantly in the foothills of the Velebit mountain range. Pag can be reached by a 340m bridge (driving from Zadar via Posedarje), or by ferry from the mainland port of Prizna to Žigljen in the north of the island.

Did you know…?
…that the grid plan of Pag town was drawn up by one of the greatest Croatian architects – Juraj Dalmatinac (Giorgio da Sebenico) – and everything in Pag fits right into place: town walls, towers, forts, squares, churches, monasteries, palaces and citizens’ houses.

…there are numerous drinking water springs on Pag. The water mostly originates from the slopes of the Velebit mountain range and passes under the seabed before reaching the island. There are three freshwater marshes on the island: Veliko blato, Malo blato and Kolansko blato.

…not far from ACI Marina Šimuni, and close to the town of Novalja, Zrće beach is a wildly popular summer clubbing destination. On Zrće young people party 24/7, which is why Pag Island has acquired the moniker of “Croatian Ibiza”.

Amenities
reception with an exchange office and with a shopping point with rich selection of accessories from the ACI collection, cash point
first-class seafood restaurant
grocery store
toilet and shower facilities with separate disabled provision
15t crane, maintenance and repair shop, slipway for boats up to 8 m in length
car park
Wi-Fi internet access
fuel station in Novalja harbour (7 nm)
Approach
In daytime a chapel to the southeast of the village serves as a landmark, and during the night the approach is marked by a green lighthouse on the southern tip of the entrance (Fl G 3s 7m 3M). The exact position of the lighthouse is 44°27.8’ N 14°57.5’ E. After passing the lighthouse, keep to the middle of the channel until the marina is sighted. There is a shoal on the western side of the entrance to the marina, and therefore the middle of the bay should be kept to when entering it. When approaching at night or in bura winds, it is advisable to head for a berth in the north-eastern sector of the marina. 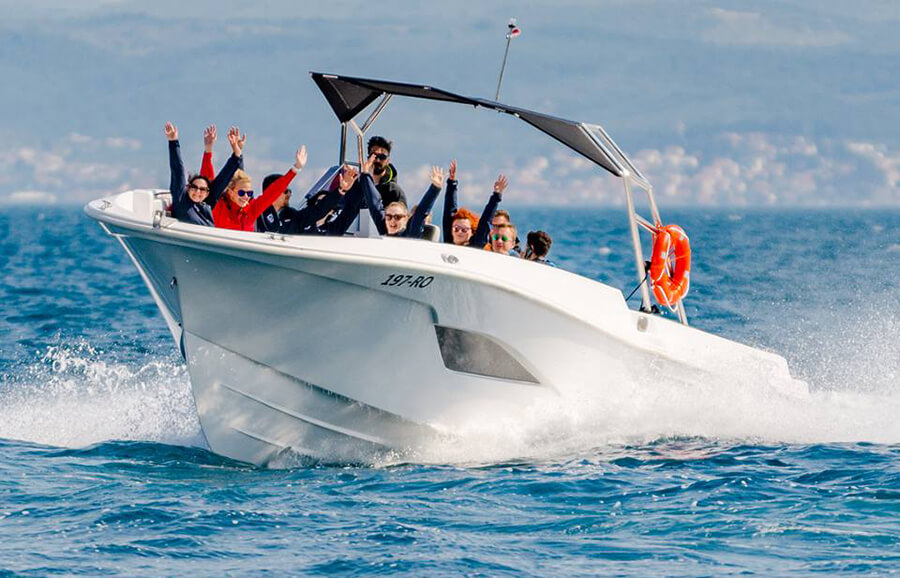